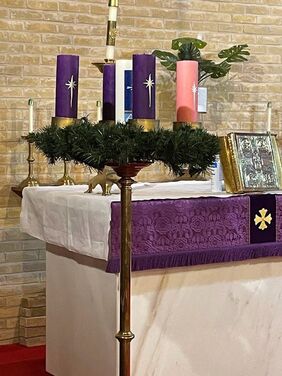 This December,  as I’ve reflect on the last two years, I alternate between, grief and gratitude. And sometimes memories from past Decembers creep in. A few days ago, I found myself traveling back in my memory to a funeral in 2008 in Denver.

Clergy have the privilege of serving at many funerals, but this time, I was there as a pallbearer. With Christmas just around the corner, the loss seemed even more painful in contrast with all the holiday decorations and music.

Right before the service was to start the family realized that they needed a reader for one of the lessons, and I was asked to read. I tried to decline. My friend’s son looked me in the eye and said “Please, I think you should read.”

I stood at the podium in a church in my hometown looking out at the faces of family and friends. I began to read, my voice cracked, and tears began to roll down my cheeks as I read words from Isaiah 25:
​
“On this mountain God will destroy the shroud that enfolds all peoples, the sheet that covers all nations; he will swallow up death forever. The Sovereign LORD will wipe away the tears from all faces; he will remove the disgrace of his people from all the earth.  The LORD has spoken. In that day they will say, "Surely this is our God; we trusted in him, and he saved us. This is the LORD, we trusted in him; let us rejoice and be glad in his salvation."

Even as the Covid 19 pandemic seems to slowly recede, it’s reminded us dramatically that we live in the shadow of death. And in December many of us live with a strange mixture of both joy and grief. I do believe life wins in the end, but the day God “swallows up death forever” seems distant.

We who profess the Christian faith, believe Jesus rose from the dead. We know that the night will not last forever, and that the light has come.  Jesus the light of the world is still with us, and as the apostle John writes “The light shines in the darkness, and the darkness did not overcome it.”

So, despite the challenges and loss of these last two years, I sense that Jesus, the Son of God is asking again that we open our hearts and homes and invite him in. “O holy child of Bethlehem….be born in us today.”
.
In Christ,  Father Paul Frey

Purify our conscience, Almighty God, by your daily visitation, that your Son Jesus Christ, at his coming, may find in us a mansion prepared for himself; who lives and reigns with you, in the unity of the Holy Spirit, one God, now and for ever. Amen.
​(Book of Common Prayer, Collect for the Fourth Sunday of Advent)

Paul Frey, born in 1955, has been Rector of Christ Church, Laredo, Texas since October of 2004. He is married to Anne Rooney of Portland, Oregon. They met  at Church of the Redeemer, Houston, Texas in 1977.  Anne works for the Office of Research and Sponsored Projects at Texas A&M International University. They have two adult children, Colin, in Portland, Oregon, and Suzanna, in San Antonio, Texas.

Prior to moving to Laredo, he and Anne served at Church of the Redeemer in Eagle Pass, Texas from 1998 to 2004. From 1992 to 1998 he oversaw Christian Education and Youth Ministry at Truro Church, in Fairfax, Virginia. From 1989 to 1992 he studied for his master of divinity degree at Trinity Episcopal School for Ministry in Ambridge, PA.

Prior to seminary, he worked for six years with homeless people as Assistant Director of St. Francis Center, a day center in Denver, Colorado which still serves 500 to 600 homeless people a day. He has also worked as a construction worker, a contractor, a salesperson, and church based neighborhood social worker.

His college work was done at various places beginning at Red Rocks Community College, the University of Houston, graduating from Loretto Heights College with course sharing assistance from the University of Colorado at Denver and Metro State University.  (He highly recommends going to college prior to starting full time work!)

In Laredo, Paul served for more than 3 years as president of the board of the Casa Misericordia Domestic Violence Shelter. He is a member of the Laredo Daybreak Rotary Club, and as a voting member of the Laredo Independent School District School Health Advisory Committee. He volunteers with Tennis for the Blind.

In the Episcopal Diocese of West Texas he’s served as  Dean and as Chaplain at Camp Capers, numerous times, Mustang Island Chaplain, and has been a member of the Executive Board of the Diocese, the Board of Trustees of TMI - The Episcopal School of Texas, the Evangelism Committee, the Standing Committee and served several times Dean of the Western Convocation in the Diocese of West Texas.

Paul is a history buff, a science fiction fan, a Denver Broncos fan, a San Antonio Spurs fan, a movie buff, fond of dogs and most other animals, and enjoys fishing, paddle boarding, sailing, snorkeling, and almost any activity that gets him outdoors.
​
As a child he spent his formative years in San Jose, Costa Rica, as part of the Episcopal Church there, going to school at the Country Day School. His family later moved to Guatemala City, Guatemala.  He studied at Colegio Americano de Guatemala. From his missionary parents, he developed a heart for mission work and missionaries. He's been privileged to serve on mission teams to Uruguay, Argentina, Costa Rica, various places in Mexico, as well as domestic short term missions.